Hey everybody! Golden Abyss, one of the games I worked on for Cadillac Jack finally got released, so I can post what I did for it. Here is a feature symbol and splash that I made. I also uploaded a compilation of animations that I made for Golden Abyss, and the Funny Bunny money game released a couple of months ago. Check it out on Youtube! :) 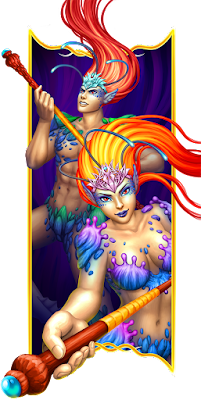 I'm in the process of preparing for Rose City Comic Con next month, as well as an art bazaar I applied to (don't know if I'm getting in, but why not make more products anyway?) Anyway, more about all that later. For anybody who will be in Portland, hope to see you there!
Posted by Irene Strychalski at 3:59 PM

Support me on Patreon!